Are we at risk from ourselves? Human and antihumans cannot exist side by side in a relativistic universe.

A question that came up in a recent pub quiz I frequent left me in a confused state for several days. It was a trick question: who devised the thought experiment known as Schrödinger’s cat? Now the obvious answer is of course, Erwin Schrödinger (a detail predictably lost on the other quiz contestants), but the reason for leaving its mark on me wasn’t the fact that the question came up, but the implications of the original experiment. In short, a cat in a box is either dead or alive; until the box is opened and the cat’s condition observed it is both dead and alive.

The idea that a cat can be both dead and alive is called superposition: being in two opposite states at the same time, and the reduction to one state at the moment of observation is described as a collapse. There have been numerous interpretations of the experiment, but what struck me was the possibility that the issue of matter and antimatter had not been taken into account. If everything has a duplicate, it’s anti-form, let’s call it, then objects can exist in two states. Not necessarily alive and dead, but in some other form of superposition. That would mean somewhere in the universe there is another Terence Pearl!

Associates of mine would probably shriek at the thought of there being two copies of me, but Yves Sunier and Diana May Ronson at the Institute of Quantum Biological Studies in Vienna have considered the possibility and implications of every human being possessing an anti-matter version of themselves. In a recent paper published in the Vienna School’s journal they gave a name to this anti-human: the Janome, after the double faced Roman god Janus, and postulate what properties a Janome would have. Where antimatter differs in that it has opposite charge and spin to matter, a Janome would have to portray some outward (anti)human equivalent of this opposition.

So, just as scientists question why matter seems to outweigh antimatter in the observable universe, an asymmetry brought about by baryogenesis, Sunier and Ronson have left open the question: where are the Janomes?

All around us, according to Alexei Berkoff, the Ukrainian philosopher and author of the book Quantum Effect and Supernature (Megelev, 2002). Berkoff argues that all elements of myth and folklore can be explained by looking to quantum mechanics and theoretical physics. In a symposium held in September 2011 at the University of Kiev, Berkoff, Sunier and Ronson shared a stage and discussed the possibility that Janomes could account for the myth of the vampire, werewolf, ghosts and other elemental forms that are found throughout the world’s cultures in their folklore.

Accepting for a moment the idea that the vampire is an example of a Janome, separated from its original body it would contain a different physiology on account of the charge and spin of its component antiparticles, it could be prone to annihilation if it came into contact with some bosons and hadrons (the particles responsible for forces), it might well interact differently with light resulting in three dimensional shadows where its four dimensional self blocks out antiphotons (Solidity of Nothing: the effect of anti-light in four dimensional space. Wadjanewski and Soamas, 2009).

What Berkoff refuses to be drawn on is what happens to the real human if the antihuman comes into existence? ‘That is a postulation that strays too far into moralistic philosophy, which Erwin Schrödinger may have been prepared to discuss, but not me. The ephemera of morality is a radioactive by-product of factual research.’ What is common to many myths and legends is that the human body must first die before its Janome can come into existence.

Is death caused deliberately or accidentally by contact with the Janome? Does it kill us or come into existence after death? Is there a superposition regarding human existence and what causes the collapse that brings about the Janome’s life? Sunier and Ronson don’t have the answers yet, but as scientists in the field of theoretical and experimental physics continue to unravel one quantum mystery after another we may soon know how these supernatural creatures come to exist and perhaps, if they pose a threat, how to stop them existing in the first place.

We Are Toten Herzen at Amazon Kindle 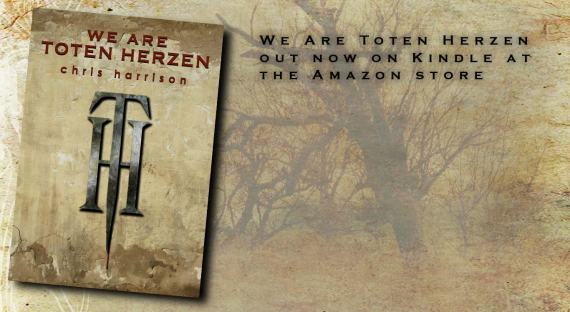